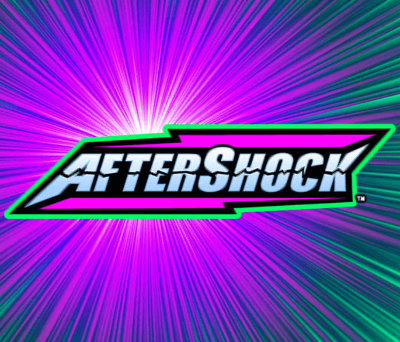 Aftershock is a slot machine game created by WMS. It’s a brightly coloured slot featuring 3 reels and 5 paylines. The original slot machine game was launched on casino floors and proved to be an instant hit! Online retro slot fans keep playing this game mostly due to its refreshing representation of the classic slot machine genre. Due to its success, more versions of it were later released.

WMS, SG Interactive and Scientific Gaming have gone all out with this classic slot. In order to ensure that this casino game has the shock value necessary to keep players excited, bonus rounds are a part of its gameplay. During the base game, players can randomly trigger a free spins round. You’ll know this when the game’s lights start to flash as the reels shake. A jackpot can also be won during free spins!

The Aftershock slot machine developers have stayed true to the retro theme of the game. As such, players will find the classic ‘BAR’ symbol, as well as pink, green, yellow and red ‘7s’. These are the lower value symbols. Bigger payouts, however, come when players land the Wild, Double Aftershock Frenzy, and Triple Aftershock Frenzy symbols on the reels.

With the creation of online casino games, developers had to step up their game so as to stay relevant. And that is exactly what happened with Aftershock. It was a casino floor slot machine with a loyal following, that still proceeded to play it once it evolved into an online casino release. Play it for free or real money at any online casino with WMS titles.